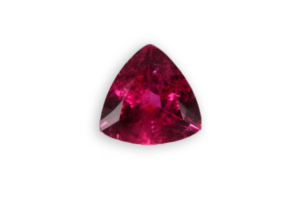 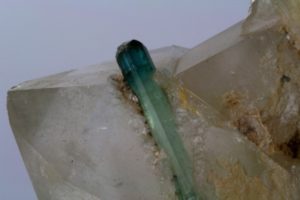 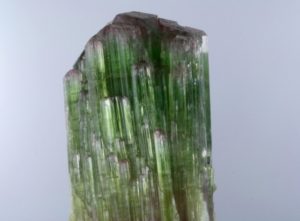 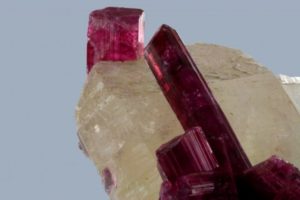 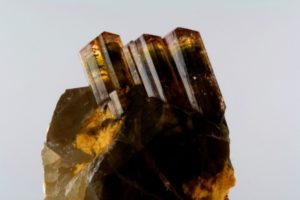 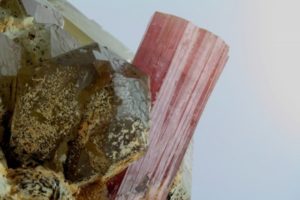 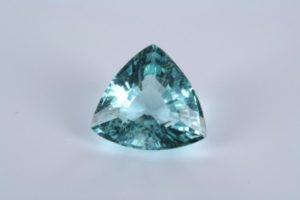 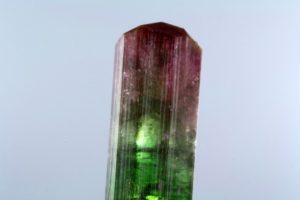 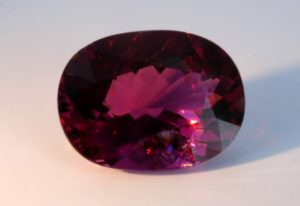 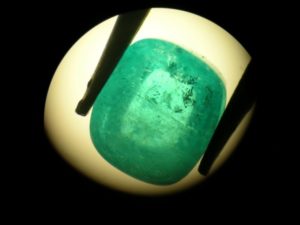 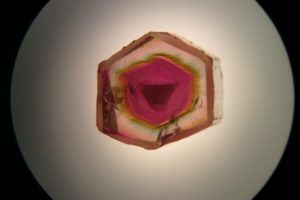 Its name comes from Sri Lanka, Ceylon, where it was called “tourmali” or “torra molli”, stone attracting ashes, it is considered as a colored zircon. It was not until 1703 that the Dutch brought it to Europe. It was identified by Buffon in 1759.
It presents the phenomenon of piezoelectricity and pyro-electricity: it gets electrically charged under pressure or heat … The Dutch in the eighteenth century, used it to retrieve the ashes of their pipes. In France, it was called “the magnet of Ceylon”.
According to their compositions, which vary, there are “several” tourmalines, including:
The elbaite (its name coming from the island of Elba in Italy), whose variety “Moor’s head” with black tip.
The dravite (from Drau in Carinthia),
The buergerite (in homage to the American M.S. Buerger),
The tsilaisite (a city of Madagascar), The uvite (Uva Province in Sri Lanka),
The liddicoatite (in homage to the gemologist Liddicoatite variety two-tone pink-green often watermelon,
The schorl, black coloreed.
Tourmalines are divided into several varieties accordingto the color:
“colorless” achroite, colorless and very rare.
The rubellite, red, where the most sought is raspberry red.
The dravite: yellow to dark brown.
The verdelite, the “green stone”, the most common one .
The Indigolite or indicolite with shades of duck – blue, very popular.
The siberite: lilac pink to purplish blue.
The schorl (formerly schorlite), very common, which is black.
The paraiba variety is a commercial name used for blue-green elbaites, discovered in the state of Paraiba in Brazil in 1987, their color is due to manganese and copper, they are highly sought after as gems.
There are tourmalines with a shimmer of the type “cat’s eye ” found in Brazil, predominantly green or blue.
A crystal of tourmaline is rarely of a solid color, there is usually a color gradient from top to bottom of the stone, or then, from the center to the periphery. Finishing in black, the crystal is called “Moor’s head”, finishing in red, “Turk’s head”, with a red heart surrounded by green, “watermelon”.
There are also chrome tourmalines whose green color is very intense.

all the existing colors , there is usually a color gradient from top to bottom of the stone, or from the center to the outside

strong in the blue and green varieties, less clear in other colors

many liquid fissures and parallel channels

It is found in pegmatites or alluvial deposits. If tourmaline has a country, this is Brazil, which is the largest producer in the world (Minas Gerais region of Salinas, and Aruçuai and Paraiba). Those of Paraiba have exceptional blue and green colors, because rich in copper and manganese.
Afghanistan should be added, and also Australia, Burma, the United States (California, depleted deposits, Maine), India, Madagascar, Malawi, Mozambique which produced in 2008 the rubellites of an intense color, Namibia, Nepal, Nigeria, Pakistan, Russia (Urals, where of a bright red, they are called ” Siberian Rubies “), Sri Lanka, Tanzania (especially green chromite tourmalines), Zaire, Zambia, Zimbabwe, Italy (Elba), Switzerland (Ticino).
In Mozambique, in its Nampula province, produces since 2010, “paraiba” tourmalines that have the same shades of blue and green as those of Brazil.

This is primarily a stone that is cut to make jewelry but can also be fashioned into trinkets, in small bottles or even statues. The stones the most requested are the bright red and the blue-green paraiba.
A crystal of tourmaline is not of the same color depending on which direction you look at it … this is due to strong pleochroism of tourmaline, which led to the cut so that their table is parallel to their main axis in order to lighten the color when they are very dark. However, to strengthen the tones of pale stones, their table must be perpendicular to this axis.
Almost all the cuts are suitable for tourmaline, oval, round, rectangular, octagonal … More and more jewelers are taking advantage of the infinite color palette of tourmaline to create unique works, because no stone looks like any other.
Lalique used many tourmalines in his jewelry from the early twentieth century. More recently Jean Vendome highlighted many exceptional tourmalines.
Tourmaline is the stone anniversary of the eighth year of marriage.

Easy to care of, durable, resistant to household cleaners, washed with water with dish soap and then rinsed with pure water without lime and finally with alcohol. Avoid “thermal shocks”, the rapid transition from cold to hot.

Glass is the most common, reproducing most of its grades and above all its glassy luster. The enamel doublets look rather similar for the dose of color is quite accurate, especially for the green, but they are easy to identify. Doublets made of synthetic spinel – enamel -synthetic spinel, with green and pink enamel, mimic very well bicolor tourmaline. It is forbidden to name the green tourmaline “Brazilian emerald”, “Ceylon chrysolite”, “peridot of Ceylon” the blue “sapphire of Brazil,” the red “ruby Siberia”.
Heated between 450 and 650 ° C, their color changes, the green becoming “emerald”, the brown-red, bright red, the others become lighter . Their color modified by gamma rays is not stable.
We know how to synthesize tourmaline, but the resulting products are not marketed.

Tourmaline would play a big role, allowing communication between the chakras, generating harmony and developing noble sentiments, the stripes of its crystals transmit supreme power. It would make ideas clear, increase the speed of intellectual reactions, useful for children learning to walk, the elderly and disabled. Depending on the color of the stone, it would report specific effects, including those attached to the same color gems . Thus, the green would act on the nervous system, the sense of touch, smell, taste, while the red would be beneficial for people who are nervous, anxious, angry, while the black one, would protect from negative energies, it would absorb the negative waves and them back to earth. It would inspire poets. Worn as pendants, crystals of tourmaline would renew the energy of the whole body. Sticks, especially black, with natural edges would be very effective. Its astrological correspondences are Libra, Pisces and Capricorn for verdelite, Sagittarius, Aquarius and Pisces for Indigolite, Scorpio, Aries and Taurus for rubellite, Capricorn, Sagittarius and Cancer for the schorl and yet the Aries (for red), Libra (the rose), Scorpio (for the red and black), Capricorn (for the green and black).

Extraordinary crystals are known: one of them, 40 cm long, is the Museum of Louranço Marquez (Mozambique), another of 250 carats, the size of a pigeon’s egg, was given by the king Gustav of Sweden to Catherine II in 1777 and is held in Moscow.
Legends: it is said that once upon a time, a small land emerged from the vast Indian Ocean, this rock was detached from the African continent. This isolated rock piles off Mozambique experienced an extraordinary event. The night was about to fall, the darkness was invading the lands, this land was almost invisible when a violent storm broke out, lightning streaking the sky and the wind uprooting trees. In the early morning, residents discovered that the heavy rain had washed the soil and uncovered invaluable tourmalines, this land is called Madagascar. 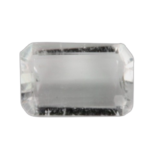 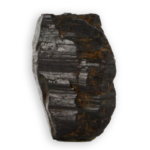 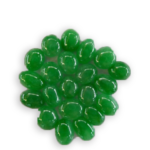 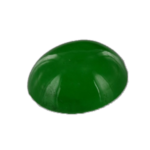