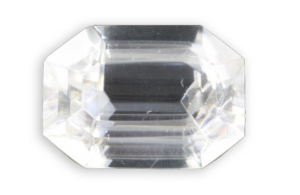 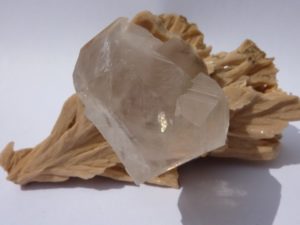 calcite crystal on aragonite from Dalnegorsk in Russia 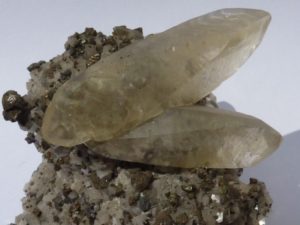 calcite crystals of galena from U.S. 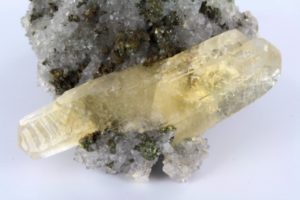 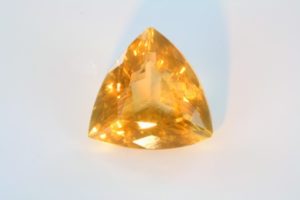 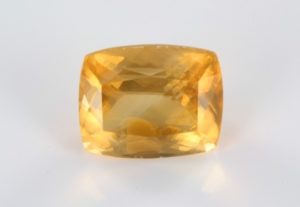 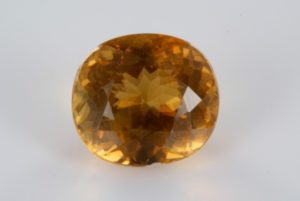 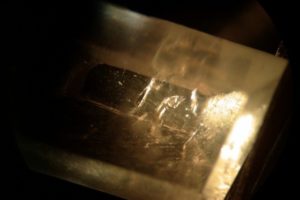 It is known since antiquity, its name comes from the Greek “khalx” for lime. Identified and analyzed from the seventeenth century and then by Rene-Just Haüy to its easy cleavage. Called Iceland spar, the crystals exhibit the phenomenon of double images: a feature seen through a calcite crystal is split. The term applied to spar minerals that had an easy cleavage and the fragments after cleavage were similar.
It is the reference for the standard hardness N° 3 in Mohs scale of hardness, which counts 10. It is very easy to identify: it effervesces with acids.
The manganocalcite (manganoan calcite)is a calcium and manganese carbonate which gives it a pink color, it is sometimes called pink calcite.
Cobaltoan calcite is a pink calcite that contains Cobalt.

many metal ions color it. The manganocalcite is pink.

pearly on the cleavage that it easy in 3 directions

depending on the metal ions present, it can be very strong and very colorful

rhombohedral and scalenohedral in “ pigs theeth “

This is one of the most common mineral, is found on all continents, in many deposits. Pakistan, Spain and Turkey exploit it industrially. Mexico also produces masses exceeding the ton. It was in Iceland that large rhombohedra, completely transparent, obtained by cleavage, were found and where we can clearly see with the naked eye the phenomenon of birefringence.

This is a collection stone, it is crafted into cabochons, made into plates used in wall coverings, for carved objects like chess sets, bowls, ashtrays, lamp bases …

It must be kept away from household products: it dissolves in acid. It scratches easily and is sensitive to shocks because of its cleavage in 3 directions. It can be washed with pure warm water, but it must be dried immediately.

It would be a stone of balance, confidence. Balance between the masculine and feminine energies, in the functions between various organs, he would act on the proper functioning of liver, kidney, gall bladder.
When it is yellow-orange is a soothing stone that brings joy, wellness, social interaction, it would have a positive effect on the absorption of calcium as much as many carbonates.
Blue it would be soothing for children, green it would be regenerating and purifying, red in connection with the root chakra it would be invigorating, in the end Iceland spar, transparent and duplicating images, has always been considered as a “magic” stone, allowing to see a different reality, split, leaving imagination and beliefs express themselves.
The pink manganoan calcite would be a powerful stone in the field of softness … in connection with the heart chakra it would have soothing effects, strengthen the subtlety, discretion, refinement and as such it would be appreciated in the Far East. 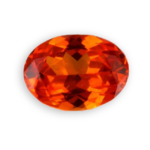 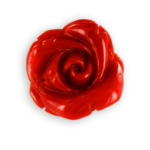 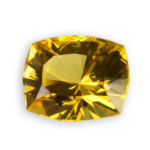