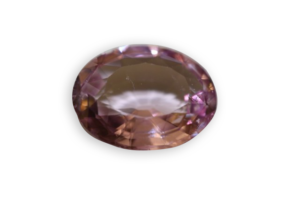 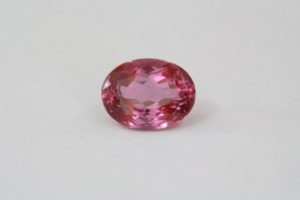 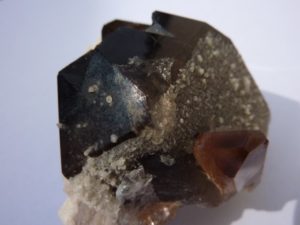 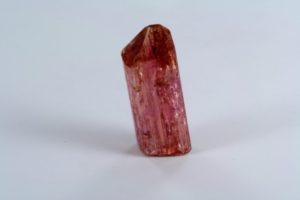 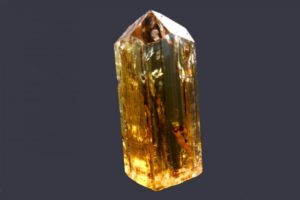 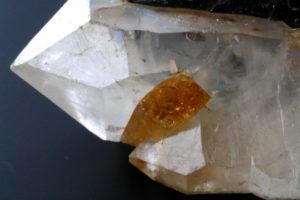 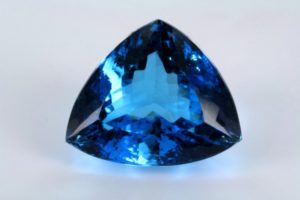 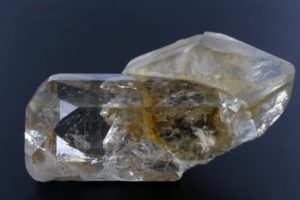 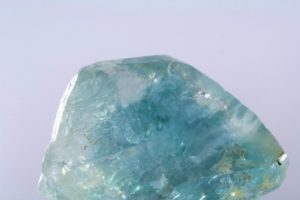 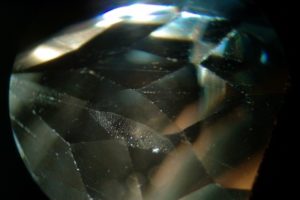 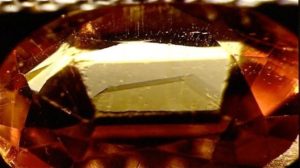 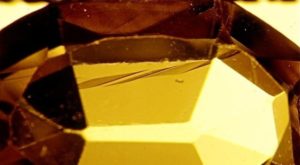 All the yellow stones were called topazes before we learned the difference from the others. This name probably comes from the island of Zebirget, former Topazos , on the Red Sea, where the peridot was found in the Middle Ages, unless it comes from the Sanskrit “tapas” for fire.
The color is rarely vivid, a yellow-orange, but the most sought after is the pink to orange-pink color, coming from Brazil, it is called “imperial” in honor of the Emperor Don Pedro.
It is the standard hardness number 8 on the Mohs scale of hardness, ranging from 1 to 10.

the most beautiful are pink-orange, called "imperial"

easy cleavage that makes it fragile

low, biaxial positive, the highest indices are for pink or intense orange varieties

light for yellow and low for the blue ones, and net for the pink -red and intense orange

for the pink variety and according to the origins

by color but still low in yellow or orange

head prisms, with many facets, often with octagonal cross section with longitudinal striations.

It is found either in pegmatites or in alluviums. The lodging of Schneckenstein (Ore Mountains in Saxony, Germany) was the most famous but it only is of historical interest. Currently, Brazil is the largest producer, who provides the finest specimens, especially of “imperial topaz” : the “imperial” mine of Capao is located in the region of Ouro Preto, near Belo Horizonte. About 40 kg are removed each month, but only 600 g will be cut, so about 3 000 carats in the end.
It is also found in Scotland, in Northern Ireland, Australia, Burma, China, United States, Japan (with large colorless crystals), Madagascar, Mexico, Namibia, Nigeria, Pakistan, Russia (red-violet topaz of Marengo in Siberia, and transparent blue crystals of the Urals), in Sri Lanka and Zimbabwe.
In 1964, a blue topaz of about 100 kg was found in Ukraine and the Smithsonian Institution, holds, cut, several thousand carats.

The colored topaz are cut in grades or scissors, or oval-sized in a “Portuguese”cut, the colorless are cut brilliant, those rich in inclusions are cut cabochon or faceted.
The transparent ones are used in the optical industry as lenses. When in Powder, this very hard stone, is used for polishing.
Its easy cleavage makes it fragile to crimping so it is to be used with caution.
The name “Royal topaz” was used for orange sapphires: it is prohibited in jewelry.
The blue topaz is the stone anniversary of the fourth year of marriage and the imperial topaz is the stone for the anniversary of the 23rd year of marriage.

It is very hard … but beware of shocks due to cleavage. Cleaning with water containing detergent, rinsing with water without lime and then with alcohol.

Sometimes some heated citrines or amethysts are sold as golden topaz (“Spanish topaz”, “topaz from the Urals”, “burnt topaz”) but serious jewelers only speak as topaz for the real one.
We can also heat up to 450 ° C some real topazes in order to accentuate the color. It is to be noticed that the topaz itself can be used to imitate diamond if it is colorless.
Synthetic ones are known since 1976, including the blue ones. By heating or irradiation some turn pink, or colorless or blue. Some topaz in which the blue color was obtained by irradiation, being radioactive, and are now banned from sale.

Indian doctors were using this stone to tone the heart of their patients and help their bloodstream. The Chinese believe that it levied the sun’s energy and so transmitted energy and good health and encouraged everyone to hang one in his house. Its color would determine its powers. The colorless one brings light and promotes intellectual activities, clarifying ideas, helping concentration, and the blue one generates dialogue, listening to others, communication between people, raising friendships. Many put it on the solar plexus chakra to release anxieties, and it would act on the nervous system, in case of insomnia (Frontal chakra).
The very bright flashing topaz, it is sought because it propagates cheerfulness, happiness, spurs the body.
The pink would regulate the blood flow and vascular exchanges, also acting on the lungs, liver, kidneys.
The green one, very rare, would have potent effects on the liver activity. In the Middle Ages Andreas, Bishop of Caesarea said that many who suffered of eye’s runoff could use topaz to dry them. It was the stone of St. Matthew because it had been given to him to enlight his community whose heart was darkened.
According to the Baroness of Staffe (- The gems and jewelry -, Paris, 1896), it inspires the horror of blood and topaz must be a present to men deciding for war. Its astrological correspondences are Leo and Gemini for the golden topaz and Sagittarius and Aquarius for the blue topaz.

In ancient times, called “golden stone”, it was said to draw this metal and facilitate its exploration. In Europe, in 1348, it would have cured some pestilent, because Pope Clement VI who had visited them, was wearing this stone on a ring.
The most famous topaz was found in 1640 in the region of Ouro Preto, it is the Braganza, weighing 1,680 carats and mounted on the crown of Portugal, although it has long been thought that it was a diamond! The Capao mine provided a crystal the size of a beer can (50 cm long): it is called “The Monster”.
The Museum of Natural History in New York holds a very well formed crystal of 300 pounds, measuring 80 x 60 x 60 cm also coming from Minas Gerais. The mineralogical museum of Florence (Italy) has one of 150 kg. The Gorny Institute of Leningrad has a huge crystal originally from the Urals (Mourzinka), the Treasury of Dresden holds a fine collection of carved stones. And as always, it is the Smithsonian Institution which has the largest cut gems, all coming from Brazil: the largest, yellow, weighs 7,725 carats, a blue one 3273 carats, a greenish-yellow one 1469 carats.
Legends: in the seventh century BC, the king of Lydia, Gyges, found in the flanks of a brazen horse a magic ring with a dual face, on one side was the image of the sun carved on a topaz, and on the other, that of the moon engraved on an emerald. The ring carried signs that, spoken aloud, rendered invisible. The Caudal king, having showed his wife naked to his friend Gyges, the latter, outraged, threatened Gyges with death if he did not kill her husband. The king of Lydia used the power of his ring, became invisible and killed his friend. In return, the queen became his mistress. He then took over the kingdom and founded the dynasty of Mermades. He used his ring on other occasions, this enabled him to become very rich and win battles, but the ring and the magic words disappeared and nobody knows where it is. Gyges was killed fighting against the Cimeriens and the Lydians. 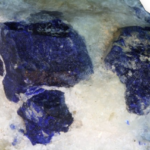 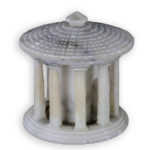 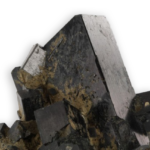 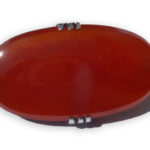