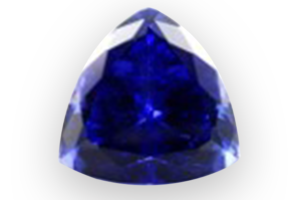 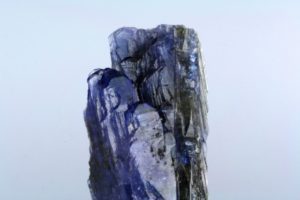 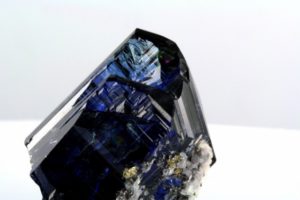 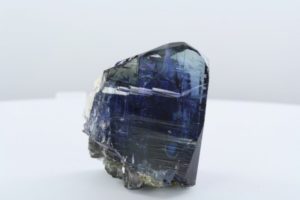 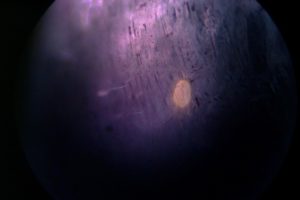 This is the blue variety of zoisite.
It would have been known since 1954, but it was in 1967 that Manuel de Souza “discovered” this gem by chance, in Arusha, Tanzania. Soon there were talks in the media about the “blue treasure of Africa”, referring to large crystals looking like sapphires. John Saul, a geologist working at the site, sent samples to his father in New York that brought them to the famous jeweler Tiffany’s who named it “tanzanite” because the English pronunciation of “zoisite” was too close to the word “suicide”. .. and launched it in the U.S. market in 1968. But according to some says, it was the vice president of a New York museum, Henry Pratt, who bought it by chance in 1968, in Idar-Oberstein (Germany). Researchers at the German study of gems of Idar Oberstein identify it as an unknown variety of zoisite. During its formation, it is the transformation of vanadium between 450 ° C and 700 ° C which gives it its blue color.
Tanzanite is not a mineral recognized by the International Mineralogical Commission, for which it is only zoisite, close to epidotes.
In the 1990s, some “tanzanite”samples, or rather, some colorless, green, orange-brown zoisites, were discovered, the green chromium variety was wrongly called “green tanzanite”.
Tanzanite has the characteristic of changing color according to light: blue under the light, it becomes violet under incandescent light.

the other colors are simply called “ zoisite “

pearly break on the cleavage

Today, tanzanite is only found in Tanzania, only in the north, at the feet of Mount Kilimanjaro in the Arusha region,at Mererani, in an area not exceeding 10 square km., where a few mines extract it from a graphite very hard gangue, that needs to be reduced in powder with dynamite, which often breaks the large crystals.
The largest tanzanite found so far weighs 126 carats and would be in the € 500 000 range.
The Masai control at 95 %, the collection and resale to retailers located in Arusha and, curiously, they only get excited for this gem, ignoring rubies, garnets, diamonds … Many made “fortune”, owning motorcycles, gold watches, cattles, and buildings in town, because they are adviced traders, intractable. The gems are then exported, especially to the United States, where the sale of tanzanite is placed just after the sapphire.

The rough stone is not usually of a beautiful pure blue, but it has brownish shades, then we heat it up to 600 ° C and then the blue tint that appears is stable, the brown being practically visible.
As the stones have three axis of color – purple, blue, brown – the lapidary must know how to choose the one that is more favorable, because according to how he will place the table, perpendicular to the axis blue or purple, the gem will be blue or purple … each stone has a different color that personalizes it. The dark blue is the most sought.
The most beautiful piece of jewelry fashioned with tanzanite would be a necklace in five rows belonging to the American actress Elizabeth Taylor.
It is the American jeweler Tiffany’s, which has mainly helped to publicize this gem on the international market.
Tanzanite is the stone of the 24th anniversary year of marriage.

It is impervious to acids. However it is not to be exposed to shocks or scratches. Washing with water with liquid dish soap, rinse thoroughly with water then with alcohol and fast drying at room temperature.

There are glass imitations and also doublets comprising a glass culet and a crown in tanzanite, or two synthetic colorless spinels assembled by a blue cement. Of course also synthetic corundum. We found very recently some clear tanzanite where the color is enhanced by a diffusion process with cobalt.
In Tanzania, some cordierites are proposed in place of tanzanite. There is also some blue synthetic forsterite imitating quite well the color of tanzanite.

The moderate heating of tanzanite is accepted and considered as a phase of beautification that does not destroy the internal structure of the stone. Unheated tanzanite have a shade of chestnut. Very few tanzanite do not have that shade of brown without using the heat treatment step.

It is said that long ago, at the foot of the highest mountain in Africa, Mount Kilimanjaro, a huge bush fire of undetermined causes ravaged huge areas populated by big felinae. The fire was extinguished, the people came to check the extent of damage and then noticed that the soil in the area of Mererani, covered with ashes, was studded with stones of a blue purple fascinating nuances.
They were zoisites which will be called “tanzanite” from the name of the country, Tanzania. The Masai say that the soil will produce them as long as large animals will survey the Earth. 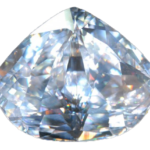 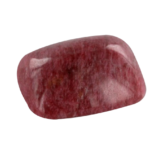 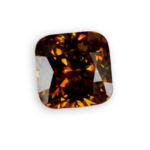 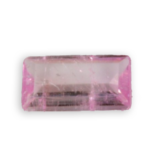