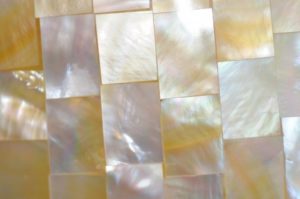 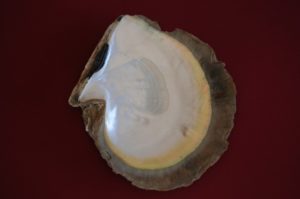 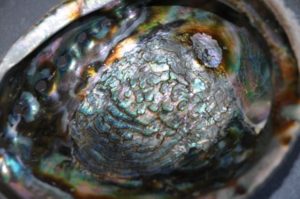 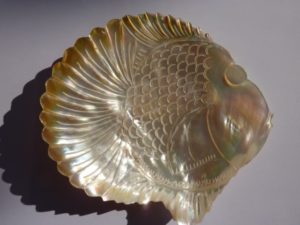 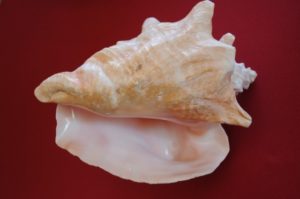 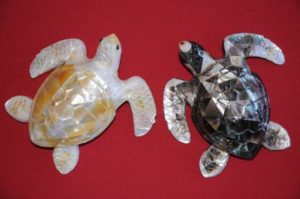 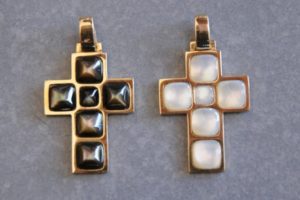 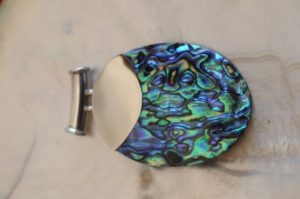 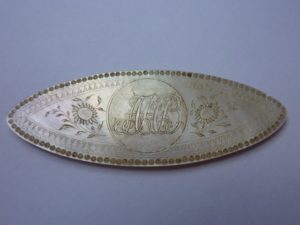 Mother-of-pearl or Nacre is the substance that constitutes the inner part of the shell of certain mollusks, its name comes from the Latin “ nacrum “, which was used to describe white matter with iridescent reflections.
It consists of a mineral part of calcium carbonate crystals in its aragonite form and an organic part called conchiolin, which represents only 4% to 6% of the nacre but can assemble all the aragonite crystals in a solid matter. It is the light diffraction on,the aragonite microcrystals that causes the iridescence.
The color of the nacre depends on the mineral ions or substances present in the environment in which the mollusk lives, the carotenoids type of organic pigments in the conchiolin contribute to the orange-yellow to purple coloration.
A very colorful nacre and multicolored in green and blue, that comes from the abalone (Haliotis australis) of New Zealand was already used by the Maori … this variety of nacre is often called “sea opal”, even if it has nothing in common with the opal.

virtually all shades of existing colors

microcrystalline structure of aragonite in some conchiolin

Regions of the world that produce the finest qualities of nacre are: Indonesia, Philippines, Australia, Djibouti, Madagascar, Polynesia … Tahiti for the black nacres.

The nacre has always been appreciated for its perfect whiteness and also for its iridescent samples. It is used for making inlays, buttons, fancy jewelry, dials of watches, brooches, religious medals …
In the Middle East and Spain it was used as an overlay for many items and even the whole furniture in Syria.
Nacre is a very solid material even being formed by 95% of aragonite which is not solid … Recent studies provide an explanation: during the growth of the mollusk, the aragonite crystals are like sealed by conchiolin in all different directions, which prevents the formation of cleavage planes and makes the shell very resistant.
The nacre is the “stone” of the anniversary of 42 years of marriage.

Fairly easy to maintain, it must be protected from scratches and acids. Cleaning with soap and water and possibly polishing with tripoli cleaner

Since ancient times, nacre was attributed specific virtues. The Chinese, the Egyptians attributed to it it the ability to protect skin and dissolved it in acid to use it as a tonic. In Latin America it was much appreciated. The very pure white nacre was equated with the Virgin Mary and symbolized the maternal protection.
In lithotherapy, nacre, by its milky color has maternal and protective virtues. It gently protects against attacks from external attacks and brings serenity and calmness. It would protect from bad influences and would give security.

In France a specific craft was developed specifically around the work of the nacre, of bones, ivory and tortoiseshell, since the seventeenth century in the region of Meru in the Oise: the luxury and fancy goods. As in the mountains, the peasants of this region were working these noble materials during the winter and were making luxury items like fans but also buttons with nacre. This region was described in the early twentieth century as the capital of pearly nacre button which was then exported worldwide and more than 10,000 people worked in the business. 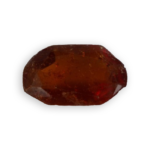 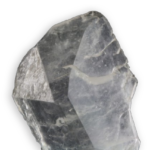 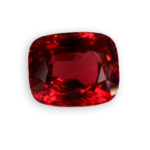 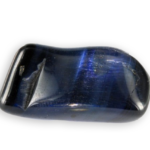