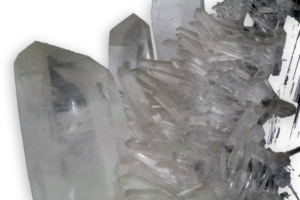 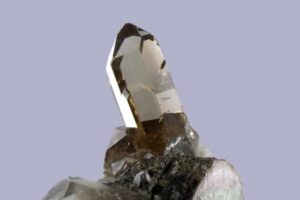 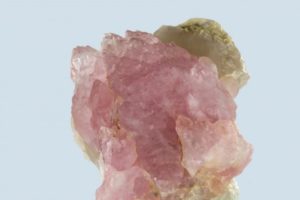 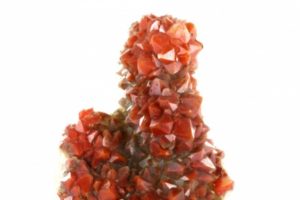 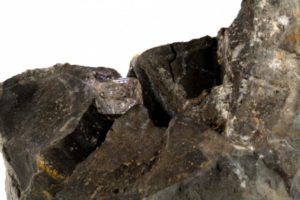 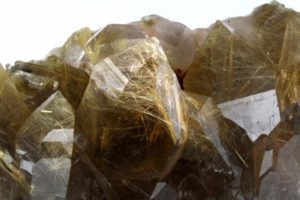 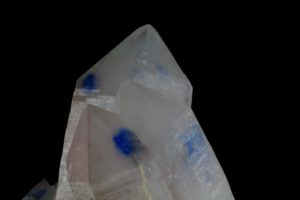 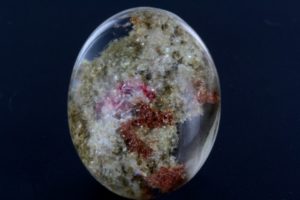 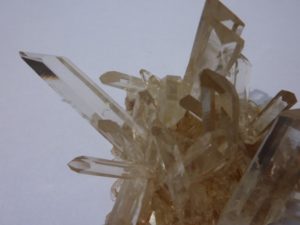 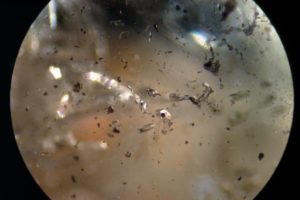 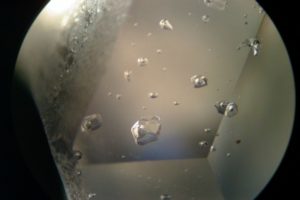 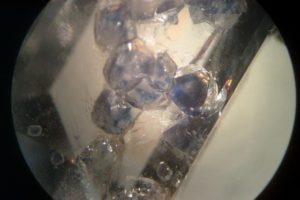 fluorite crystals inclusions in a quartz 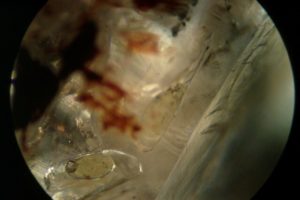 mobile gas bubble in the liquid

The name quartz comes from a slavic word meaning “hard”. Rock crystal comes from the Greek “krystallos” meaning ice, because the ancients believed that it was “eternal ice”.
It is a mineral, often regarded as a rock as it is widespread in various aspects and sometimes as a gemstone, rock crystal is the variety most prized by gemologists, jewelers, sculptors and art objects.
The smoky quartz is brown to almost black, or black (morion quartz), the latter coming from a natural or artificial irradiation with gamma rays.
Yellow quartz is called citrine and purple quartz amethyst.
The prasiolite (or prasolite) is a non-natural colored quartz, so named after the Greek “prason” for green and “litho” for stone, as it is leek green, and obtained by heating to 650 ° C an amethyst or a yellowish quartz from Brazil.
Rose quartz : its color is due to nano-fibers of dumortierite in massive rose quartz, while for crystal rose quartz color is due to natural radiation, the pink color may fade. It may present a phenomenon of asterism due to very fine inclusions of rutile.
The binghamite is the trade name for a variety of quartz with gray-brown speckle effects when cut cabochon.
Quartz is the standard of hardness 7 on the Mohs scale, which counts 10.
Quartz was used because of its hardness since prehistoric times to make tools and weapons in France and Ethiopia (dated more than 2 million years) and scrapers and arrowheads were placed in tombs in China already over 600,000 years ago. During the Neolithic in the Far East and India, it was already known how to drill it and mount its fragments for necklaces. Later, in Sumer, quartz was present as amulets, seals, items of adornment. The Egyptians used it to make statues of their gods, vases, would encrust it in their jewels and served as “living” eyes for their statues. Subsequently, all civilizations including the Greeks, Romans, Hindus … used quartz.

Rock crystal is colorless, quartz it exist in many colors

They are very numerous. Crystals of several hundred kg.( hundreds of pounds ) are known, but those that can be cut are quite rare. They often contain various inclusions. In Brazil, the United States, Russia (Urals), the European Alps, Madagascar … in France the gold mine of La Gardette, near Bourg d’Oisans in Isere has produced quartz of exceptional clarity, sometimes twinned.
The rose quartz comes from Brazil and Madagascar (from which the best quality) but also Moazambique, India, Namibia, Sri Lanka.
The smoky quartz and morion, comes from Brazil, French Alps (Mont Blanc) and Switzerland (Graubünden), Russia, Scotland, Madagascar and Ukraine …

The rock crystal has been widely used during the “Art Deco” period in the 30’s, when it was re-discovered. Today it is cut in all forms: in cabochons, faceted, rods, in emerald cut … and it is used to make decorative objects the most diverse, such as key chains and even Buddha and virile members erect in Asia!
It also has industrial uses in watchmaking because of its optical and piezoelectric qualities.
Prasiolite Quartz: faceted, it is made into rings or it is set in pendants.
Rose Quartz: it is cut cabochon in balls for necklaces, it is carved into decorative objects, the transparent samples are cut in facets.
Smoky quartz or with rutile inclusions: it is very popular and it is used to make pendants, rings, balls.
The variety with rutile needles in quartz is called hair of Venus, with actinolite needles: quartz-hair of Thetis.
Quartz may contain numerous inclusions that give it a very particular aesthetic: quartz thulite (pink aspect), quartz, tourmaline (black needles) quartz hollandite, at gilalite (also called “medusa quartz” or “paraiba quartz”), at dioptase (green). Orange-red inclusions, sometimes associated with strips of black goethite which makes it dimorphic, consist of lepidocrocite which is an iron hydroxide also a constituent of limonite.
The cut rock crystal has been called “diamond” of Alaska, Arkansas, Dauphine, Matura etc…. all these names in jewelry are prohibited.

The quartz are easy to maintain, they are hard and very little sensitive to household products. Wash with water and liquid detergent, rinse with clear water and then with alcohol.

Rock crystal was so popular that we can say it has caused the invention of glass by the Venetians in the fifteenth century to imitate it ! The clear crystal or synthetically colored exists and is used industrially in optics and clocks (quartz watches).
In recent years we have seen come to market some new treated green and blue quartz: the greens are of amethyst heated to high temperatures and the blue ones are irradiated to achieve this color.

Quartz directs forces towards terrestrial life and reminds us that each subject is the condensation of light vibrations. It would support and would remove anything that hinders our spiritual evolution. It would make our soul more transparent. It is a stone that would have great importance for people with depression or fleeing their responsibilities. A crystal in each hand and under each foot, its tip opposite to the body, would drive out the old structures and rid us of the negative energies and it would let the higher energies in.
If it is pink, it occurs at the heart chakra and would invite to sweetness, tenderness and love, its reviving radiation would influence our heart, washing it from the outrages, pains and profanities suffered.

The Apollo gallery, at the Louvre Museum ( Paris, France ), retains nearly two hundred bowls, vases, sink bowls from the sixteenth century carved in rock crystal and the Pitti Palace (Italy) is home to the prestigious collection of the Medici.
The Natural History Museum in Paris exhibits, amongst others, a cup of rock crystal, which belonged to Louis XIV, engraved in intaglio, 17 cm. high (6.7 inches ). The Smithsonian Institute holds a sphere 35 centimeters in diameter (13.8 inches ) perfectly transparent carved from a 48.5 kg (100 pounds ) block from Burma and and a faceted egg of 7000carats. 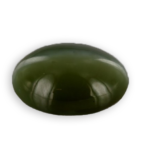 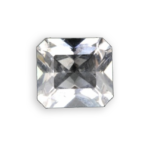 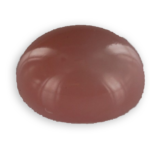 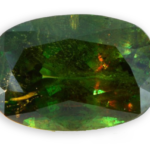