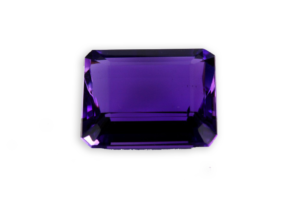 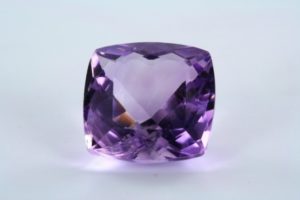 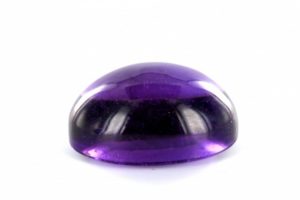 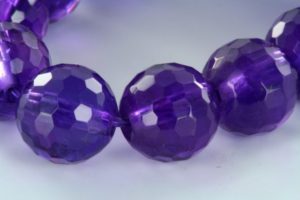 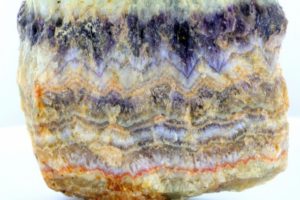 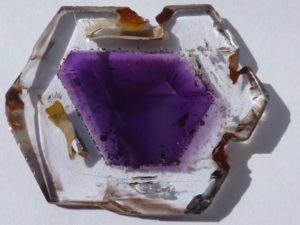 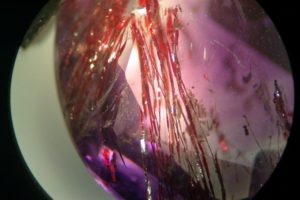 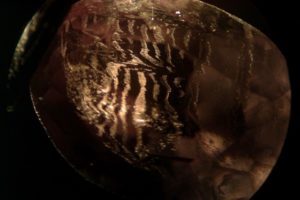 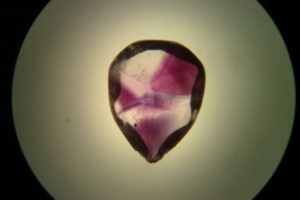 It is a purple variety of quartz. Its name comes from the Greek “a” private and “methysto” meaning “ inebrietion ” wore as an amulet it was supposed to guard against drunkenness. The Greeks believed that drinking from a cup carved from this stone had this capability. Plutarch believed that its name came from its color, of water mixed with wine … and not from a protection against drunkenness … Its crystals are located on a rock matrix, and sometimes the color is more intense in the edge. The amethyst is known since ancient times since we found cabochons mounted on Egyptian jewelry, the pharaoh wore one on his breastplate, alongside with eleven other rare stones, long before the high Jew priest for whom it symbolized one of the twelve tribes of Israel. The Apocalypse mentions it in chapter 21, verse 20, in the description of the heavenly Jerusalem according to Saint John. It was also the color of the apostle Judas. It adorns the ring of bishops, the same color as the purple of their outfit. Master Albert the Great, around 1250, still claimed that “this stone is remarkable for the drinkers and scholars.”

color due to iron, very light to dark purple, which is most wanted quality. Shades purple, lilac.

varieties that are not gems of amethyst are translucent.

from very low to definite, purple-red to purple-gray

sometimes greenish or yellow-orange, according to sources.

stripes in rows, clumps of needle - like goethite, hematite, and cacoxénite and liquid inclusions. And also areas of colors in chevrons or straight more definite.

It is a stone extremely widespread throughout the world and we can say that is likely to be found wherever there are quartz veins, but more especially in Madagascar, Mexico, Uruguay, Russia (the Urals), India, Romania (Capnic), Slovakia (Banská Štiavnica), Brazil, Uruguay.
France was an appreciated producer since ancient times and until the Middle Age: some Spaniards came to Auvergne to stock up.
In recent decades, southern Brazil (Rio Grande do Sul, Bahia) is the world’s largest producer of huge geodes trapped in the basalt lined with a multitude of crystals, which can weigh up to a ton, measuring up to 2.50 mt. long and 1mt. in diameter. There is even a town aptly named “Ametista”. There are crystals known for being up to 25 centimeters in length. The largest geode found in 1900, measured 10 m high, 5 wide and 3 deep and weighed 7 tons.

It is extremely varied and it is known since very ancient times, it was made into jewelry and valuables. The most beautiful crystals are faceted brilliant-cut, elongated or round, the others passed to the barrel or shaped into decorative objects… not to mention cuts of Ancients who were supposed to avoid drunkenness, and their intaglios executed at the forefront of quartz.
There are at the “ Cabinet of medals from the National Library of France François Mitterrand “ many ancient intaglios and also at the Louvre, some large dimension cuts. The Treasure of the Tower of London has a huge sphere of transparent and faceted amethyst, surmounted by the largest diamond coming from the cut of the Cullinam, the Star of Africa.
The name “eastern amethyst ” which was used for violet spinels is now prohibited. The Amethyst is the stone for the anniversary of the sixth year of marriage.

This stone has been and is still widely used in jewelry because it is not fragile, harder than glass, it is resistant to household products. It is washed with water containing detergent and rinsed first with water then with alcohol before drying. However it is sensitive to heat: if it is strongly heated by accident it becomes yellow or green!

It can be heat treated but it changes its color into yellow (citrine) or green (prasiolite) at different temperatures. As a result of purely scientific work it is possible to make synthetic stones (Japan, Russia) whose physical properties are nature-identical but differ by the absence of inclusions, resembling all as standard products . It is made even with plastic materials. Actually this is not commercially interesting, the natural amethyst being largely widespread and reasonably priced.

It is said to be useful in all cases of disturbances related to stress, tension, and poorly supported living.. it symbolizes wisdom, humility, sincerity, piety … and would teach us confidence in the universal forces, its vibrations bring calm and dispell the fears, worries and anger.
It would create a bridge between heaven and earth, strengthen the love of God, would eliminate the selfish intentions by encouraging disinterest. Uniting the forces of red and blue in the violet, it gives balance and stability in love. It reveals the secrets of life that we are unable to grasp and would give us valuable directions in order to understand our dreams and make predictions understandable . It would facilitate intuition, meditation and guide us toward our true destiny.
In Buddhist temples where importance to the esoteric sciences is given, the amethyst beads are sought. An amethyst geode placed in a room will purify the atmosphere and would provide distress.
Its soothing properties would prevent insomnia and put under the pillow, it would facilitate a peaceful sleep by providing pleasant dreams. In the Middle Ages, it was used to cure neurosis, hallucinations, hysteria. It was incorporated, as powder, in ointments, through which it would transmit its energy.

Mythology tells us that Zeus cheeted once again his wife, with the princess Semele who gave birth to Dionysus, a demi-god who became the god of wine and ecstasy. Drunk, he will fell in love with the beautiful nymph Amethys and wanted to love her. She will call for help Artemis, the goddess of hunting. To protect Amethys, she turned her into a crystal. Dionysus, after becoming crazy mad, regains control and tries to unite in the crystal his two love ones, the wine and the former nymph: he poured wine on the crystal that turned into the purple color of amethyst. 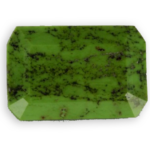 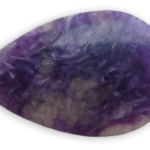 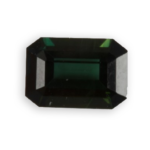 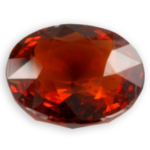